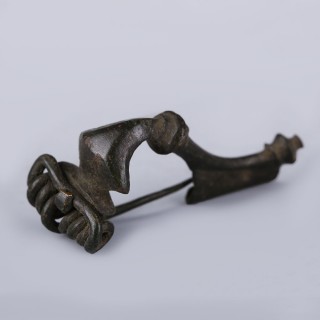 An Ancient Roman bronze knee fibula, composed of an arched bow with a double bulge to the central part of the bow. The fibula comes with its original pin and catch plate. Knee Fibulae have been recovered in military graves across the Roman Empire, but especially in the Pannonia region (modern Hungary), where this style is believed to have been originated from the 2nd century AD. Unlike crossbow fibulae, which were worn as a symbol of rank in the Roman army and civil service, knee fibulae were almost exclusively worn by soldiers.

For a similar item, The Metropolitan Museum, accession number 1993.3.7

Complete and intact with nice dark patina to the surface.