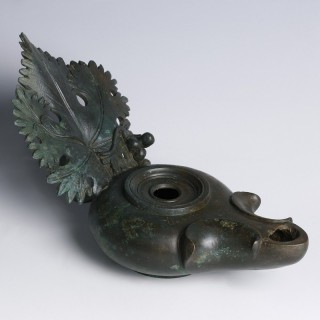 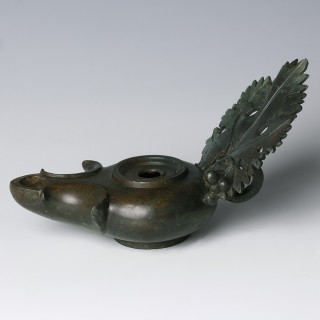 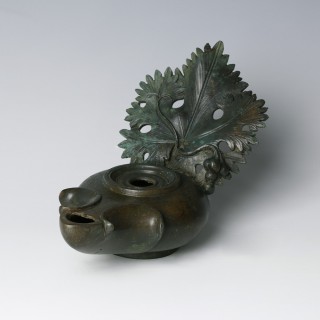 A very fine and rare bronze lamp with a volute nozzle and a largely undecorated body. There is a sunken filling hole with concentric circles surrounding. Such a design alludes to accomodating a separate, now-lost lid. The entire body perches on a small, ringed foot. The defining feature is a large handle to the back of the body, formed into a beautiful vine leaf motif with a miniature bunch of grapes to the right of the leaf.

Roman bronze oil lamps would have been produced by casting the precious metal or hammering it into a mould. Bronze was the most popular metal used to create oil lamps, however examples have been found in gold and silver. Whilst bronze was the most common metal used for lamps, they were still something of a rarity even during the Roman period and the majority are believed to have been owned by those of a higher status. Terracotta lamps would have imitated and taken inspiration from bronze lamps, and they were available to a larger section of society. Even though bronze makes for a sturdy lamp, fewer examples have survived to this day, in comparison to their terracotta counterparts, because the metal was most likely melted down to be used for another purpose.

Acquired UK provincial auction in 1990’s. Then, private collection belonging to a gentleman, the J.L collection.