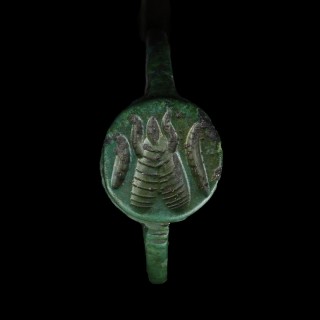 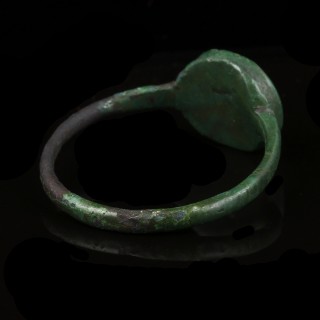 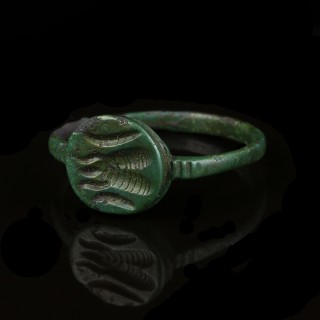 An Ancient Roman bronze signet ring featuring a circular section hoop and a circular bezel, finely engraved with the depiction of a winged insect, possibly a fly or a bee. The shank is decorated on the upper part with parallel, incised lines.

Signet rings occur in various ancient civilizations, as they were used to “sign” documents through the impression on hot wax of the symbol on the ring, which would lead to the owner. Insects such as flies or bees were invested of various symbolic meanings in Antiquity. The bee was a very important symbol of rebirth and strength for the Romans, as bees disappeared during the winter and reappeared during springtime. Bees also produced honey, which for its qualities was named the “food of the gods” and was often employed as votive offerings. Furthermore, the bee was also one of the symbols of the Roman goddess Diana, the protector of wildlife and nature.

Very fine, some of the outer layer and green patina on the shank lost due to ageing.