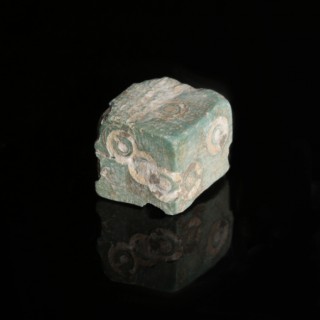 A single Roman bone six-sided dice, known as tessera in Latin. Each face displays an incised circle with an incised dot inside, ascending from one to six in quantity. The dice features a nice light blue pigmentation.

Roman gaming included games where dice were used solely or together with a board and pieces that required moving with the luck of the roll. Whilst gambling and gaming were only legal pastimes during the festival of Saturnalia in December, plenty of Romans partook in the activity during the year. Dice such as this were also carried all across the Roman Empire by travelling legionnaires, who would gather at the end of a long marching day to play a game or gamble.