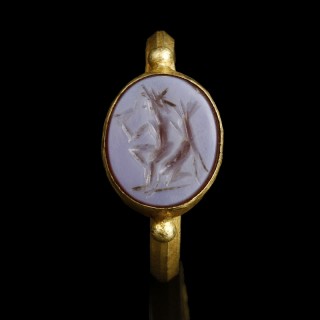 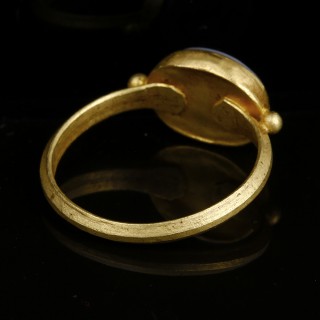 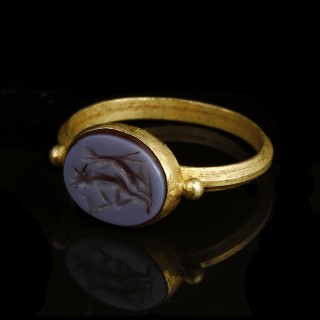 A beautiful Ancient Roman solid gold ring featuring a round section hoop and an oval bezel. The bezel is set with a sardonyx flat-topped cabochon, nicely engraved with an intaglio. The nicolo intaglio depicts a figure, shown seated, facing left and wearing a radiate headpiece. To the figure’s side the carved depiction of a seated dog. The figure might be referred to the Ancient Roman goddess of hunting and chastity, Diana, here portrayed while resting during the hunt, while holding a cornucopia with her left hand.

Ancient Roman jewellery was an essential public display of wealth. The Italic population of the Sabines and of the Etruscans were described in early legends and myths as wearing gold jewellery. During the Roman Republic it became customary for all the senators, chief magistrates, and at last for the equites also, to wear gold rings. The custom of wearing gold rings spread during the Roman Empire, where jewellery’s design became more and more elaborate, embracing new designs and techniques, such as the nicolo. The nicolo is an intaglio or cameo carved in onyx in such a way that the depiction displays a beautiful translucent delicate blue colour.