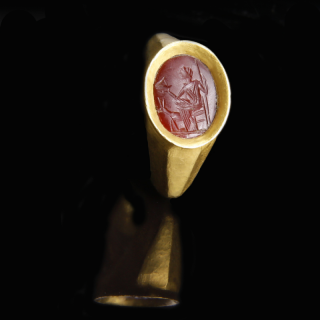 Description: An amazing Roman heavy gold ring with carnelian intaglio with a depiction of seated goddess Diana. It features a substantial D-section gold hoop with facetted shoulders; bezel has a funicular flange. AN inset carnelian plaque with intaglio figure of Diana seated with a dog by her side, bowl or lamp in her raised hand. Diana is the Roman version of the Greek Artemis and she adopted many of her attributes and mythological tales. Diana was originally an ancient goddess of the woods and forests, and in Rome and Latium was considered the protectress of virginity. As a goddess of the federal cult of the Latins she had a temple on the Aventine Hill in Rome from an early period. Her most important shrine in Italy was at Lake Nemi, close to Rome, which had oracular powers and was patronised by members of the Imperial family.

Provenance: Property of a Mayfair gentleman; acquired by the family during the 1970s. Supplied with a positive X-Ray Fluorescence metal analysis certificate.