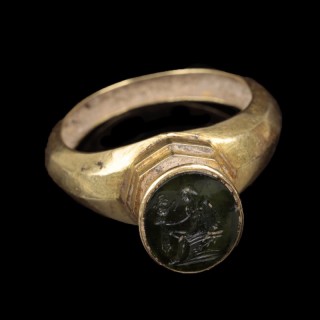 An exquisite Ancient Roman gold ring featuring a round section hoop, expanding shoulders and an oval trumpet bezel, set with a dark green chalcedony stone. The bezel displays a finely carved intaglio with the depiction of a nude male figure, probably the Greek hero Diomedes, shown seated with his right leg bent and his right hand outstretched. The throne where the figure is seated is decorated with a laurel or a palm branch, symbolizing Victory. In front of the figure stands the Trojan Palladium or Palladion, a wooden statue of Pallas Athena, which was stolen from Troy by Odisseus and Diomedes himself, and later taken to Rome by Aeneas. Diomedes’ anatomical and facial features are captured in an extremely naturalistic and detailed manner, with fine musculature and balanced proportions. UK ring size W. Weight: 7.4 g.

As in many ancient societies, jewellery was an important social marker used to demonstrate wealth. Following the spread of the Roman Empire, Roman jewellery became more and more elaborate in the designs and in the materials used, such as precious and semi-precious gemstones. Roman jewellery reflected the culture the Romans entered in contact with, and testified the prosperity and the power of the Roman Empire. Gold rings were the most popular pieces of Roman jewellery, usually embellished with fine carving, such as this beautiful example.