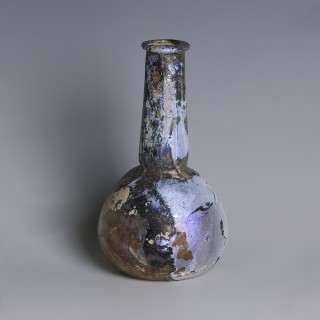 A finely modelled Ancient Roman translucent blown glass unguentarium of a large size, featuring a flat base, globular body and a long, cylindrical neck neck leading to a folded, everted rim. The vessel is vastly covered in large areas of beautiful mother of pearl-like iridescence.

Glass vessels of this type were extremely popular across the Roman Empire, used in everyday life as container for oils, balms and perfumes, but also used in funerary practice, hence many unguentaria have been excavated in graves and funerary chambers. Blow glass was originally translucent, featuring a plain, light green-blue colour. Minerals were added to create more interesting hues and colour combinations. The pearly iridescence featured on this beautiful example of Roman glassware, was not intentional, but a result of weathering on the glass surface. Many factors would have contributed to the creation of layers of colourful iridescence, such humidity, water or the type of soil the glass was buried in.
Date: Circa 1st-3rd Century AD