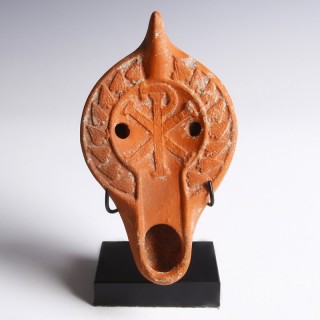 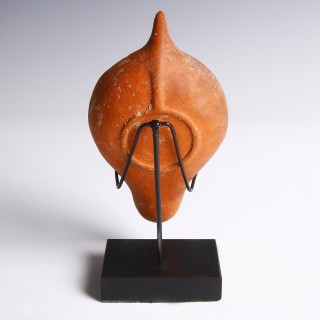 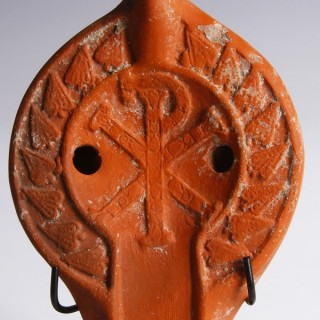 A Roman terracotta oil lamp with a long, canal nozzle with a rounded body and a small, lug handle to the rear. The discus is decorated with the symbol Chi Rho, an early Christian symbol that is an abbreviation of the Greek word for Christ (ΧΡΙΣΤΟΣ). The shoulders frame the scene, and feature foliage motifs.

Across the Roman Empire, a lamp was originally called a ‘lychnus‘, from the Greek ‘λυχνος’, with the oldest Roman lamps dating back to the third century BC. During the Roman Empire, the variation in decoration increased. Common decorative themes depicted on the discus included entertainment scenes (such as gladiators in combat), common myths and deities, and even animals. Pottery oil lamps could be made in three different ways: handmade, wheel made, or by mould. The use of the mould (which was made from clay or plaster) quickly became popular, because one mould could produce several lamps.

Good condition, some wear and darkening on the shoulders of the exterior.