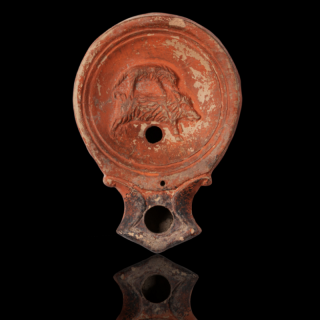 Roman Lamp with Hound and Boar

A Roman terracotta oil lamp featuring a short canal nozzle with scrolled volutes, a concave discus and one filling hole. The discus of the lamp is decorated with a hunting scene, depicting a hound attacking a boar from above, both facing right. The furs of both animals are finely incised, as are their facial features and the hooves of the boar. Two concentric rings frame the scene. This lamp is of Loeschcke type I, which is characterised by a circular body and fairly wide nozzle with obtuse-angle tip, flanked by two volutes.

Created in the Early Augustan period, the type lasted until the end of the Flavian period. Loeschcke type I, first developed in Italy, became extremely popular and was diffused to all parts of the Roman Empire through either export or local imitation. Artificial light was common throughout the Roman Empire, and pottery oil lamps offered an alternative to candle light. Candles, made from beeswax or tallow, were cheaper to buy but do not survive as well. Pottery lamps functioned by adding oil through the central hole, and burning a wick placed into the nozzle area. Wicks were commonly made from pieces of linen, but could also be made from flax or papyrus.

Very fine, intact, with minor crazing and encrustations over the whole. Minor chip on the shoulder of the lamp. Discolouration to the nozzle from use.

Roman Lamp with Hound and Boar