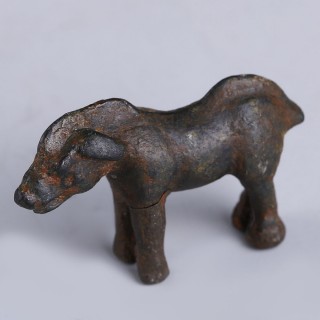 A naturalistically rendered cast bronze statuette of a wild boar, dating to Roman Imperial Times. The animal is portrayed standing on all four legs and displays facial and anatomical features, such as eyes, ears, tusks and a prominent spinal crest. Bronze statuettes in the form of deities or animals would have been placed in temples or domestic shrines as votive offerings. This particular example might have belonged to the personal shrine of a soldier, as the boar was a common symbol across different Roman military legions. The famous Legion X Fretensis, stationed in Judaea, adopted the boar as a symbol, often depicted on inscriptions and stamped on roof tiles.

Fine condition, some patination remains on surface. Front leg has been repaired.