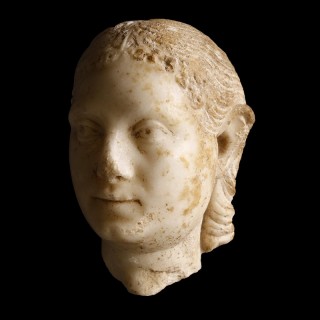 Roman Marble Head of a Woman

An exquisite Ancient Roman marble head of a woman. Her features have been delicately and skilfully carved and she bears the slight smile common to Roman sculpture of this period. Her hair is pulled back from her face into a graceful chignon and her forehead is framed by small curls. The translucency of the marble gives the illusion of glowing skin, adding a lively quality to the image. The piece would once have been part of a larger statue.

Roman marble sculpture, based upon the techniques established by their Greek predecessors, is commonly considered to be amongst the finest work in the history of European art. Though many Roman marble sculptures were copies of Greek originals, examples such as this show the simple elegance of a uniquely Roman style. Undoubtedly a depiction of a woman from amongst the Roman elite, though idealised, statues such as this were likely designed to genuinely depict the subject and thus, each is entirely unique.

In the early Roman Empire, modesty – an important value under the Roman Republic – remained a key part of Roman culture and as a result, particularly under the reign of Augustus, the hairstyles of even the most elite women were commonly simple and understated. The hairstyle worn by the woman depicted here, is reminiscent of styles worn by Livia, wife of Augustus, who is usually depicted with a simple bun at the nape of the neck. Later in the Roman Empire, more extravagant hairstyles increased in popularity.

From the Jon Lawton Collection, previously from a private German collection, acquired by Gorny & Mosch.

Extremely fine. Some signs of aging.

Roman Marble Head of a Woman