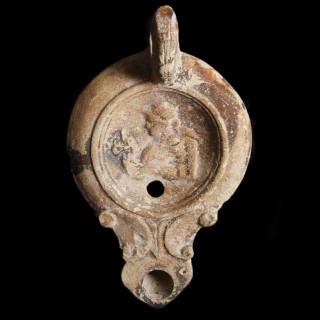 An Ancient Roman light-tan terracotta oil lamp, featuring a long canal nozzle with volutes, a decorated discus and one filling hole. The discus is decorated with two concentric lines surrounding the depiction of an Amazon, shown demi bust, facing left while holding a double headed axe, known to the Romans as a bipennis. The warrior figure is portrayed wearing a cap and a chiton. Amazons were female warriors who, under the command of a queen, lived apart from men. Their main activity was war. This decoration might be also referred to the practice widespread during the Roman Empire, to have women combatants. Female gladiators were indeed very rare, but at the same time well-documented.

Fine. Signs of ageing and earthly encrustations on the surface.