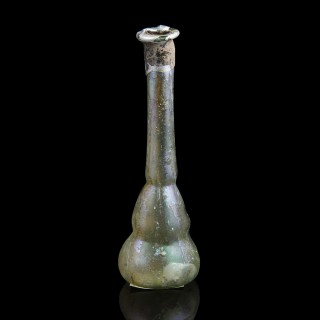 A finely modelled Ancient Roman pale green glass unguentarium, featuring a short segmented body sitting on a concave base, a long cylindrical neck and a folded rim. The glass displays a beautiful mother of pearl like iridescence to the neck and body.

Unguentaria contained perfume and oil, considered precious during the Roman Empire and often used both in private life and public ceremonies. Unguentaria, such as this fine example, are among the most popular glass shapes recovered across the Roman Empire, especially used in funerary and burial rituals, hence their frequent occurrence in archaeological excavations of ancient cemeteries.

Fine, complete and intact with iridescence and earthly encrustations to the surface.