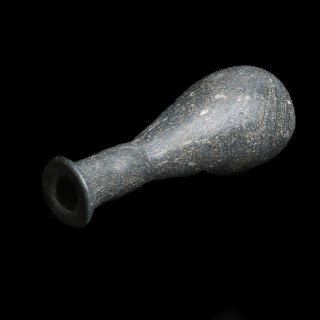 An Ancient Roman sand-core cast glass miniature unguentarium, featuring a pyriform body, a slight constriction at the base of the cylindrical neck, an everted folded rim and a flattened base. This beautiful piece features a rippled marbling of dark grey and colourless glass in various hues.
Unguentaria were small perfume or cosmetics bottles made of blown glass. They were extremely popular throughout the Roman Empire, since they contained perfume and oil, considered precious at the time and often used both in private life and public ceremonies. These type of vessels were probably used in funerary and burial rituals, hence their frequent occurrence in archaeological excavations of ancient cemeteries.