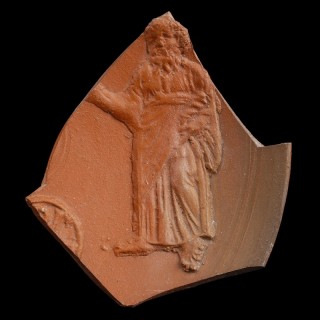 A finely rendered fragment of an Ancient Roman red slipware known as terra sigillata. The fragment features an almost complete relief of a standing figure in a beard and toga, quite possibly representing the god Jupiter. The fragment is slightly concave, showing that the image would have been on the inside of a bowl. The piece also features a simple border of shallow grooves running parallel to the bowl’s edge, as well as part of a circular design next to the figure.

The word terra sigillata comes from the Latin, meaning ‘sealed earth’, and was a form of Roman red slipware pottery, which was developed in around the mid-1st century BC, both for domestic use and export. These pieces were modelled on the lathe directly in the matrix, on which decorative motifs were hollowed out and then impressed on the smooth body of the vase, appearing therefore in relief. Sometimes the decorative motifs in relief would have been applied to the vase by using a very liquid clay. One of the most important centres of production was the Italian city of Arretium (modern day Arezzo). However, terra sigillata wares were produced also in Gaul and North Africa. Terra Sigillata vessels were often decorated in accordance with traditional Greco-Roman tastes, presenting images of classical mythology, hunting scenes, and divine figures.