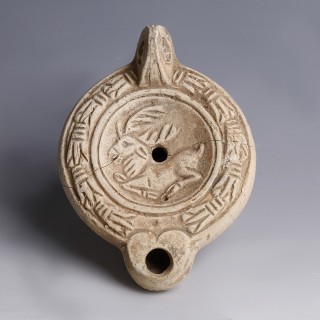 A finely modelled Ancient Roman terracotta oil lamp, featuring a short canal nozzle with firing hole, a decorated concave discus with one filling hole to the centre. An incised decoration of stylised flowers enrich the lamp’s shoulders, while the discus displays the depiction of a seated deer. The deer’s facial and anatomical features are rendered with a series of incised lines.

In classical mythology, the deer or stag was associated with the ancient Greek goddess Artemis (or her Roman counterpart, Diana), in her role as the virginal huntress. One popular myth tells the story of the hero Actaeon, who, after witnessing the goddess bathing, was turned into a stag. He was chased by his own hunting hounds and perished. Such a lamp could have been given as an offering to Artemis, or belonged to a young hunter, thereby evoking the goddess’s protection and guidance.

Fine, stress crack repaired to the body. SIgns of aging to the surface.