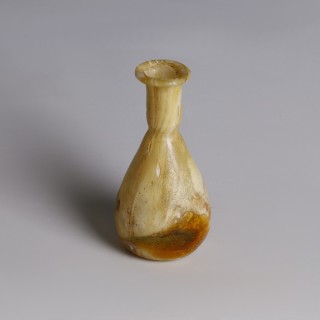 A delicate Roman marbled unguentarium used as a vessel for holding liquids. The unguentarium is made from yellow glass and features a large, pyriform shaped body with a short, narrow neck and out turned rim.

Unguentaria have been repeatedly found at Roman and Hellenistic sites, the vessel was used to hold liquids and oils such as perfume and keep them fresh. Perfume was very popular in Rome; it was produced in many different forms including as a solid, powder or liquid. It was so well used that Cicero declared that ‘the right scent for a woman is none at all’, suggesting an excessiveness. The Roman people were able to use exotic scents which had been brought over with expanding trade to the East and which would display their social status. Different scents would also have been used for different social occasions. Perfumes would be stored in vessels such as this unguentarium because its long elongated neck would give control to the flow of the perfume when poured.