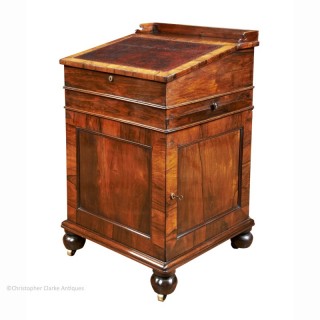 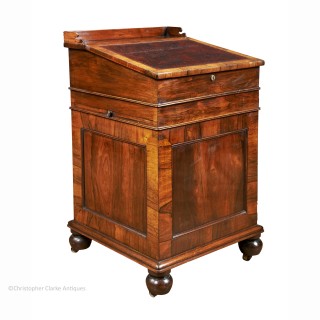 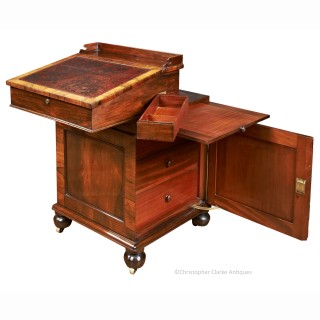 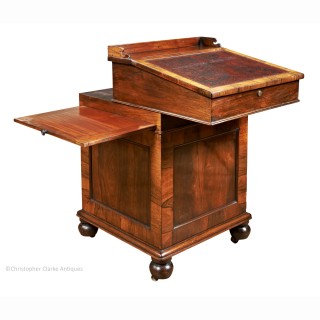 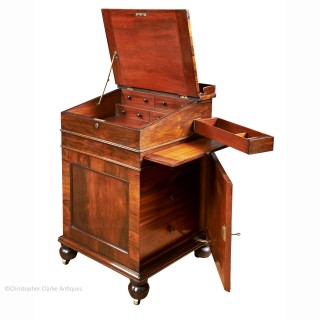 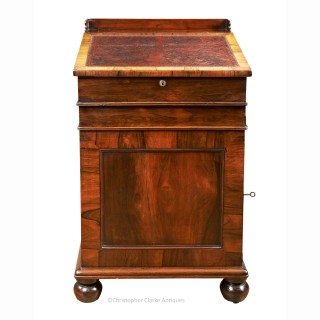 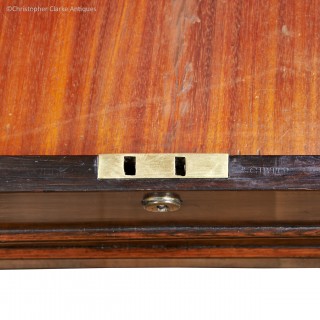 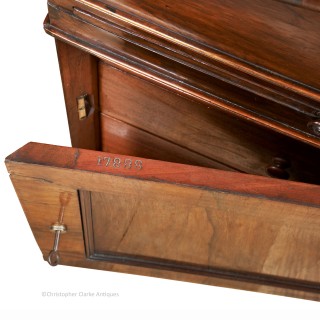 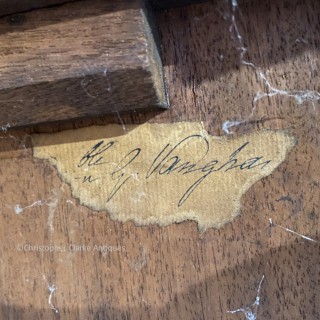 The desk is fairly typical in design for Davenports of this period, with the top section sliding forward and a cupboard to one side enclosing drawers. There is also a pull-out board to each side and a secret, hinged drawer which is a desk tidy with compartments. The slope has its original dark red leather skiver, which although worn with age, is a great colour. The interior has two rows of short drawers, the bottom two of which are false. One of the knob handles to the dummy drawers is the release catch for the secret drawer to the side. The maker’s name is stamped either side of the lock to the slope and the reference number 17888 is stamped to the top of the door.

The quality of the cabinet work to this Davenport stands out and perhaps a good example is the panelled door. The vertical edges are unusual for being mitred to form a clean join to the frame and the door opens smoothly due to the use of a brass quadrant. Behind the door are three graduated mahogany drawers with cedar bases. The cupboard has its key which also opens the slope. The desk has a gallery to the top and sits on bun feet with castors.

There is a partial paper label to the underside of the Davenport which looks to note the owner’s name G. Vaughan in ink. The label is torn with some writing missing but the letter ‘n’ precedes the name and above are the letters ‘ble’. The owner might have been the Honourable George Lawrence Vaughan who became a Captain in the 60th Regiment on the 29th August 1826. The partial letters would fit in with his rank and title. He was the second son of the Earl of Lisburne and married Mary Jospehine Roche on the 4th of October 1830 in Dublin. The date of his marriage would tie in with Williams & Gibton’s dates.

This is a well made piece of furniture by a good maker and nearly two hundred years after it was first made, perfect for working with a laptop on today. Circa 1830.

Williams & Gibton
The renowned Irish makers of Williams & Gibton can trace their roots back to the late 18th century with one of its founders, John Mack listed as a cabinet maker in Abbey Street, Dublin in 1784. He was joined by Robert Gibton, who is noted as having a workshop on the other side of the Liffey in Aungier Street in 1790. A trade label on a box in the collection of Dubin’s National Museum indicates that Gibton also made trunks, and musical instrument and gun cases. He was also an auctioneer, which was not uncommon for cabinet makers at the time. Mack and Gibton came together around 1800, moved to Stafford Street in 1803 and made their partnership official in 1805. The business flourished and in 1806 they were appointed Upholsterers & Cabinet Makers to his Majesty, His Excellency the Lord Lieutenant, and His Majesty’s Board of works.

Robert’s son William took his place in the partnership on his death in 1812. At the same time William Gibton’s brother in law, Zachariah Williams (a former apprentice in the business), also became a partner. The firm’s title changed to Mack, Williams & Gibton. Their Royal Warrant opened many doors and the company supplied a number of important buildings such as the Treasury, Four Courts, Dublin Castle, the Barracks Office, Vice Regal Lodge and the Chapel Royal. They also provided furniture for several grand country houses in Ireland. John Mack died in 1829 and the company continued, trading under the name of Williams & Gibton until 1844 when they became Williams & Sons following the death of William Gibton two years earlier. Williams & Sons continued for another eight years before the company ended in 1852.

The quality of the company’s cabinet making is excellent.