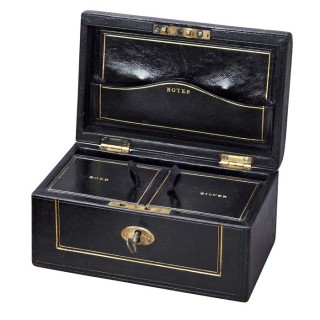 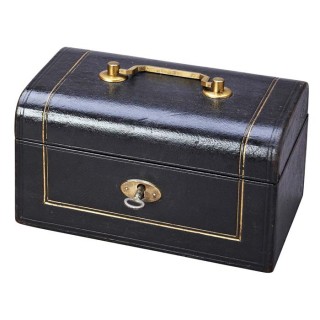 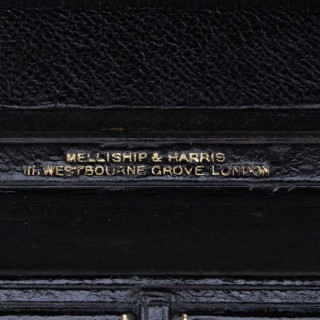 A small leather on softwood Safe Box with gilt tramline decoration and a brass handle to the top. The interior of the safe has 2 hinged lids marked Gold and Silver; behind the 2 compartments is a well which probably held a now missing Cash Book; to the lid interior there is a pocket marked Notes. The box retains its key. The maker’s details of Melliship & Harris, 111 Westbourne Grove, London is stamped in gilt between the 2 hinges. The business of George Melliship and John Harris started sometime between 1852 and 1865 and were situated at 37 Westbourne Grove and 62 Baker Street. In 1852 a G.W. Melliship esq. was resident at 13 Paddington Gardens but no listing of the business can be found. By 1869 the partners agreed to dissolve the business with John Harris continuing under the same joint name. It is at this point that it is believed the 2 previous addresses were given up with the shop locating to 111 Westbourne Grove. They remained at this address until 1914 but after the war a listing for them cannot be found. An 1876 invoice for the company describes the business as Stationers, Dressing Case, Dispatch Box & Travelling Bag Manufactures, Jewellers & Importers of Fancy Goods, Monograms Designed & Engraved, Arms & Crests Emblazoned. The invoice also shows a particularly fine trade mark of an elephant with anchor, crook and spear behind and crown above. This logo also notes that they were Die Sinkers and Heraldic Draughtsmen, Engravers, Printers and Bookbinders. Although not one of the better known box makers their work was good and they produced a wide range of items. It is known that they produced a similar box in red leather. Late 19th Century.