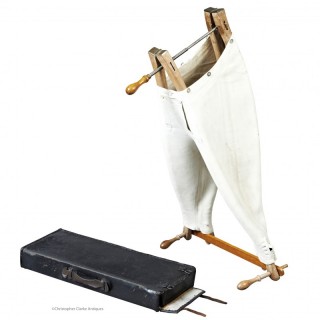 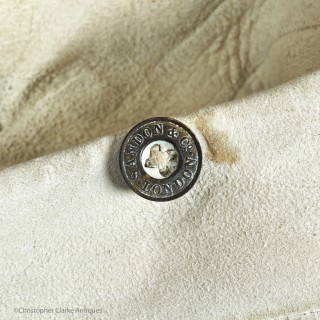 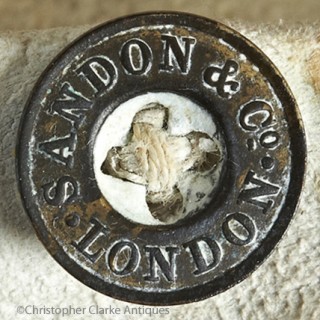 A pair of leather Hunting Breeches retaining their original beech stretchers and case. The adjustable stretchers would be used to ensure the breeches kept their shape and size, when not used. This was especially important if the leather breeches were wet. When worn, the stretchers dismantle to pack into their own case. They adjust on large pegs with screw fittings that can be used to widen the hinged, beech legs both side to side and front to back. The brass buttons are marked Sandon & Co. London, well known sporting tailors. Their letterhead of 1915 described themselves as Breeches Makers and Hunting & Military Tailors at 8, Saville Row, London. Sandon started in business in the late 19th century and continued into the 2nd half of the 20th. They enjoyed a good reputation and made uniforms for the Queen. The stretchers are branded with the owner’s initials of D.B. but there are no other clues as to who this might be. Many such breeches parted company with their stretchers and so to find a pair with both stretchers and their case is a bonus. Early 20th Century.
Case Size Is Given