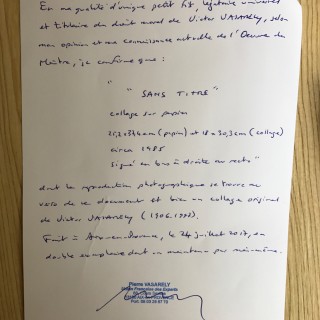 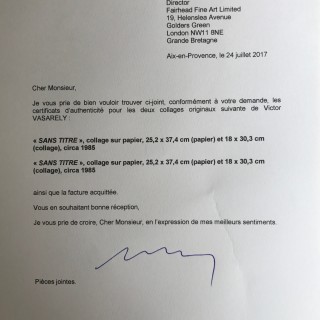 Note: Victor Vasarely, the “Father of ‘Op Art’ . His work, created in the 1930’s entitled “Zebra” is considered by some to be the earliest work of the genre. On 5 June 1970, Vasarely opened his first dedicated museum with over 500 works in a renaissance palace in Gordes . A second major undertaking was the Foundation Vasarely in Aix-en-Provence, a museum housed in a distinct structure specially designed by Vasarely. It was inaugurated in 1976 by French president, George Pompidou. Sadly the museum is now in a state of disrepair, several of the pieces on display have been damaged by water leaking from the ceiling. Also, in 1976 his large kinematic object Georges Pompidou was installed in the Centre Pompidou in Paris and the Vasarely Museum located at his birthplace in Pecs, Hungary, was established with a large donation of works by Vasarely. In the same decade, he took a stab at industrial design with a 500-piece run of the upscale Suomi tableware byTimo Sarpaneva that Vasarely decorated for the German Rosenthal porcelain maker’s Studio Linie.. In 1982 154 specially created serigraphs were taken into space by the cosmonaut Jean-Loup Chretien on board the French-Soviet spacecraft Salyut 7 and later sold for the benefit of UNESCO. In 1987, the second Hungarian Vasarely museum was established in Zichy Palace in Budapest with more than 400 works.