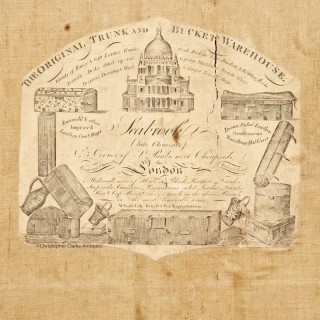 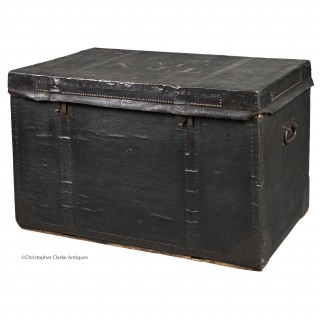 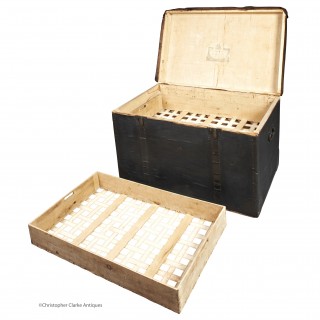 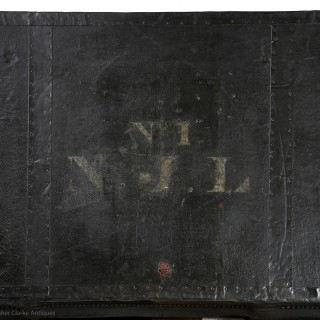 A large black canvas Trunk by Seabrook with tin straps, studs and iron carrying handles. The edge of the top has a leather lip to help seal the trunk from the weather. The interior has 2 removable trays and a large label for Seabrook of ‘No. 5 Corner of St. Pauls next Cheapside, London’. The trunk is painted to the top with the initials. N.J.L. of the owner and No. 1 so it could quickly be established what the trunk contained. The trunk retains its 2 lift out trays and is a good size to go at the foot of a bed or the end of a sofa. It is likely to be from the start of the 19th Century given the label still notes ‘Late Clements’ which suggests Seabrook was keen to establish his credentials. Early 19th Century.

Seabrooks
Seabrook had quite a long history as trunk makers and were born out of John Clements’ business, who in turn had taken over from his uncle Henry Nickless. Clements sold trunks from the same address, No. 5 Corner of St. Pauls next Cheapside, London, from the mid 18th Century and it is likely that Robert Seabrook (who died in 1795) worked for him. The company were listed under the name of John Seabrook in the directories at least until 1839 and he was, presumably, Robert’s son. By 1846 Miss Elizabeth Seabrook had taken over and by 1852 they were listed under the name George Seabrook. There is no record of Seabrook in the 1865 directory. As the label to this trunk notes, Seabrook described his premises as The Original Trunk & Bucket Warehouse. He also had a manufactory at St. Martins Place, St. Martins Le Grande. In 1838 Seabrook also listed an additional address of 1 Bath Street. By the time George took over, they had expanded to include 6 St. Pauls. The label lists the items they sold which included ‘Variety of Fancy & Gilt Leather Trunks, Portable Desks Fitted Up For Dressing Drawing & Work; Cork Jackets, Fire Buckets & Belling Boots; Copying Machines, Brush Cases & Carpet Travel Bags; Enameld & Other Improv’d Leather Coat Bags; Brown Solid Leather Gentlemens Travelling Hat Cases; Makes All Sorts of Hair & Black Leather Trunks, Imperials, Canteens, Portmanteaus, Solid Leather Trunks, Hat & Cap Boxes & every Article in the above Branch at the most reasonable terms; Wholesale, Retail & for Exportation’. Seabrook noted the business was formerly Clements on his early labels. By 1812, Clements is no longer noted.

Good, some wear as to be expected.