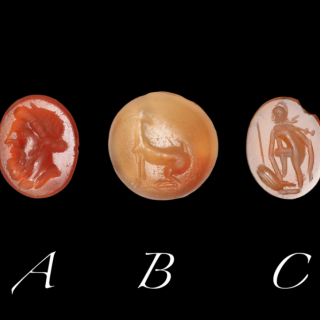 Item A is a carnelian lozengiform intaglio engraved with the bust of a bearded man or god, perhaps Jupiter or Asclepius, facing left wearing a fillet, with his hair pulled back into a low bun. It has a flat front, tapering sides and a slightly smaller flat back bezel.

Item B is an agate circular intaglio depicting a stag sitting left, its head turned back to the right. The front bezel is convex and the back bezel is slightly larger and flat. Intaglios of animal forms were often worn by Roman soldiers stationed in the provinces as well as by the native population.

Item C is an agate ovoid intaglio displaying an armed and helmeted figure facing left. Possibly Mars, the figure wears a crested helmet and a long cape, and appears to be nude. A shield and spear rest on the ground in the left field, on which the figure places his foot. An intaglio of this type may have belonged to a centurion or an officer in the Roman army, who would have used it to seal letters and dispatches. Price is per each item. Please e-mail a letter of your preferred intaglio prior to your purchase.