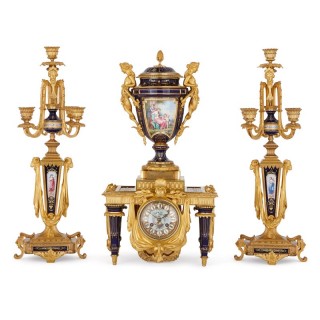 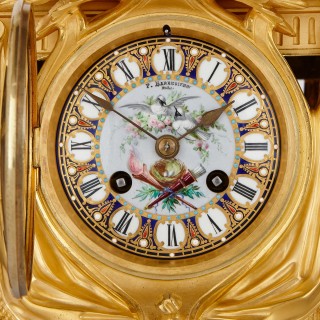 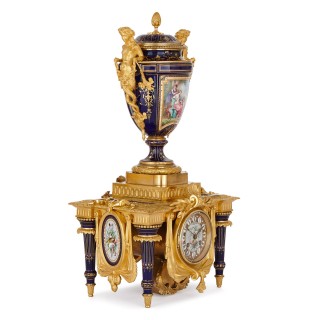 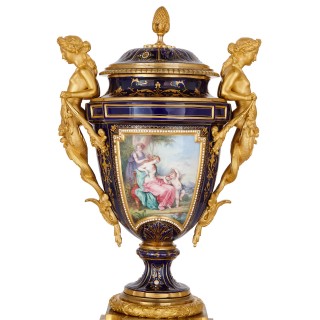 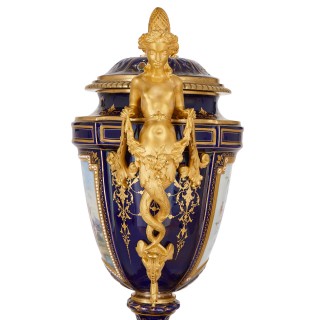 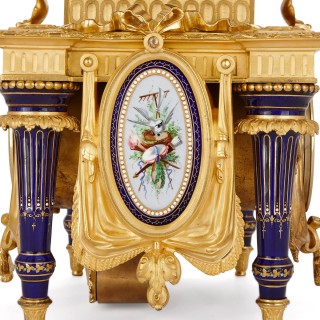 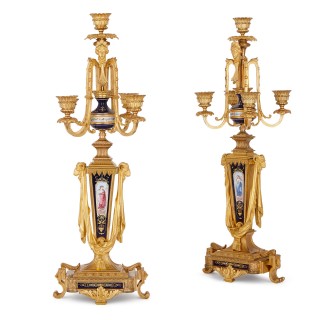 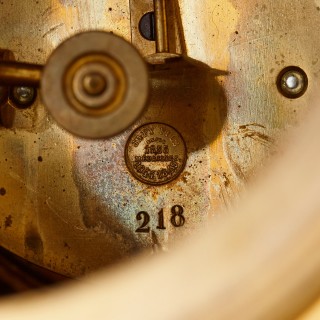 This exquisite clock set was designed in the late 19th Century in France by Louis-Constant Sévin and cast by the Barbedienne foundry.

Louis-Constant Sévin was a designer who worked at the Barbedienne factory from the mid-19th Century until his death in 1888. The Barbedinne factory was founded by the prolific bronzier, Ferdiand Barbedienne (1810-92). The company produced beautiful bronze items for an important international clientele, and won numerous awards at major exhibitions, including at the International Exhibition of 1862 in London and Paris’ Exposition Universalle of 1867. Sévin and Barbedienne collaborative pieces, like this clock set, are now highly collectable.

The set is comprised of a central clock and two flanking five-light candelabra. All three items have been crafted from porcelain, and mounted in gilt bronze.

The central clock is topped by a navy-coloured, parcel gilt porcelain lidded vase. This is topped by a gilt bronze pinecone finial and set with two gilt bronze handles, taking the form of classical semi-nude women. The front of the vase body is painted with a classical scene, which depicts the figure of Venus (the Roman goddess of love), stroking the face of a cherub, while a woman brushes her hair. A painting of birds, perched on flowering branches, decorates the reverse side of the vase.

This porcelain vase is set on a stepped gilt bronze plinth, placed on a table-form base. The base has a gilt bronze top, set on four fluted columnar, navy parcel gilt porcelain legs on gilt bronze peg feet. Swags of drapery are suspended from the table-form top. On the front, these enclose the circular porcelain clock dial, which features Roman Numerals, as well as a painting of a pair of doves, and a burning torch, crossed with cupid’s quiver of arrows, beneath a bird’s nest. The dial is signed with the manufacturer’s name, ‘F. Barbedienne/Paris’. The two side porcelain panels are similarly decorated.

The candelabra that flank the central clock are designed in a similar style. These feature five, branch-like gilt bronze lights, with foliate tops. The crowning light of each is mounted, on its front, with a classical mask. The lights spring from navy, parcel gilt vase forms, with floral bands wrapped around their middles. These are mounted onto gilt bronze stems, which are placed on porcelain supports. Paintings of fair maidens, set within gilt frames and navy borders, decorate these supports. Gilt bronze rams’ heads are mounted onto the sides, and drapery swags hang between them. These supports are set onto rectangular, porcelain-mounted gilt bronze bases, raised up on foliate and scrolled feet.