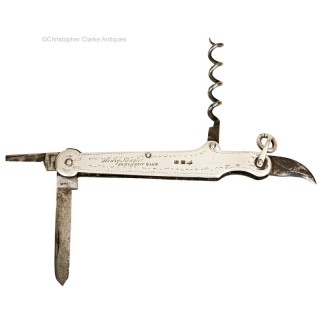 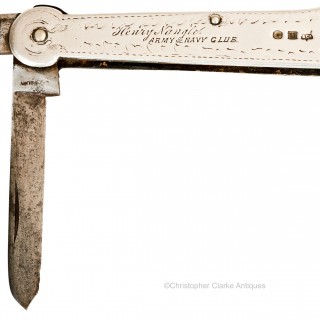 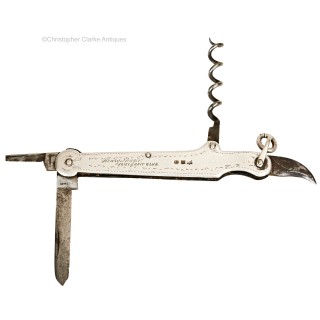 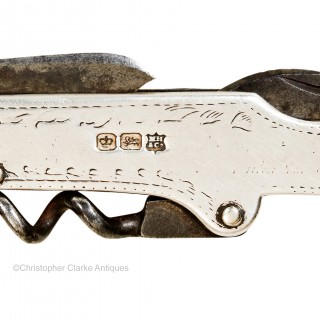 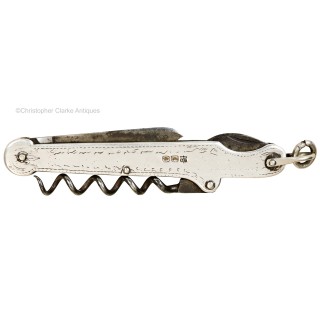 This silver and steel Pocket Knife has a long and a short blade, a corkscrew, a short curved blade and a loop. A modern version is called a Waiter’s Friend.

The silver handle is engraved with decoration and the owner’s details of ‘Henry Nangle, Army & Navy Club’. The Army and Navy Club was formed in 1837 in London with the Duke of Wellington as its first patron. Officers of the army, navy and royal marines were eligible to be elected for membership. By the 1850s it had a membership of 1600 with a waiting list half the same again. It was one of the few London clubs that ran at a profit.

The owner is likely to be Henry Nangle, who became an Ensign of the 15th Yorkshire East Riding Regiment of Foot on the 17th of January 1845. By 1858 he was a Captain. He became a Major on the 1st of April 1870 and immediately went on to half pay. There was also a Henry Bereford Nangle, who became an Ensign of the 21st Regiment in 1860 but given the pen knife was made in Sheffield it is more probable it belonged Nangle of the East Riding Regiment.

Nangle would have engraved his knife with his club rather than his regiment, which he may be liable to change as he sought promotion, as they would be a safe bet for its return if he lost it. There is a worn maker’s stamp to the long blade with the name ending ‘bury’. Hallmarked 1863.