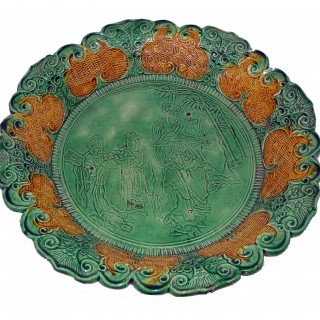 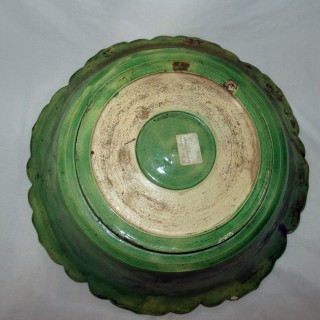 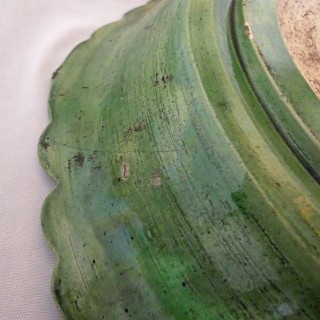 Late Shunzhi early Kangxi egg and spinach glazed carved carved and molded biscuit porcelain plate. Made in the 17th century in China at the Jingdezhen kilns c1662
The colour being green and yellow are often referred to as egg and spinach but the body is biscuit porcelain where one one firing process is missed out
The centre is carved with a figural scene representing ‘The seven Sages in the Bamboo Grove’, some sages is replaced by the term ‘worthies’. Like much folklore the telling often changes and embellishes the truth.
The story has it that during the third century – Jin Dynasty – seven sages found that they were in danger . the sages were Daoists and the Sima clan who were at that time power were strong Confucian followers and didn’t want followers of Daoism. These scholars were poets artists and musicians and some used their talents to criticize the Imperial court especially in poetry. Some pretended to be drunks and eccentrics to avoid government control. These sages gathered in a bamboo grove near one of their homes and where they praised the rustic life, simple living, alcohol and personal freedom
The sides are molded with ruyi head shaped mushrooms and clouds with and geometric patterns glazed in yellow
Very unusual piece

Crack to the rim