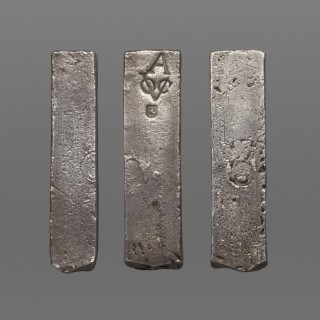 This solid silver ingot was recovered in 2004 from the wreck of the Dutch East Indiaman ‘Rooswijk’ which was built in 1737 and foundered in 1739 on Goodwin Sands, a notorious area of shifting sands lying 10 km (6 miles) off the Kent coast near Deal.

Dutch VOC ingots were made by assayers in private factories from melted coins, mainly Spanish American “reales de a ocho” or “pieces of eight” and are extremely rare as on arrival in the East they were traded for the spices and fabrics so popular in Europe. The bars were then melted down to make local currency and the silver jewellery which was so popular in the Dutch colony of Batavia, now Indonesia. And so it is only from the wreck of the Rooswijk and two other ships (Slot ter Hog and the Bredehof) that these bullion bars are recovered.

This ingot was probably cast by the assayers Grill who used the sign of the goat.