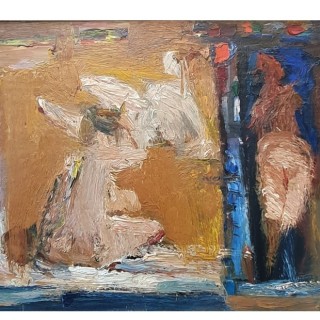 A wonderful example of Philipson’s early work, high impasto and stunning jewel like colours. The subject of bathers and women is one he continued to paint throughout his career.

Sir Robin Philipson was one of the most important painters in Scotland in the second half of the twentieth century. Born in Cumbria in 1916, his family moved to Scotland when he was fourteen, and he subsequently studied at Edinburgh College of Art. He returned to Edinburgh after his war service he then taught at Edinburgh college of Art and become Head of Painting and Drawing at the College in 1960, a position he held until he retired in 1982.

Philipson was President of the Royal Scottish Academy from 1972 to 1983, elected to the Royal Academy in 1980 and in 1976 he was knighted for his services to art in Scotland.

Philipson’s paintings were notable for their energy and use of rich, jewel-like colour. His diverse subjects included cathedral interiors, soldiers, exotic wild animals and poppies.

Philipson had nine solo shows at Aitken Dott & Son (The Scottish Gallery) during his lifetime.

Currently 89 of his works are held in UK public collections, including the Tate, National Gallery of Scotland and Government Art Collection.