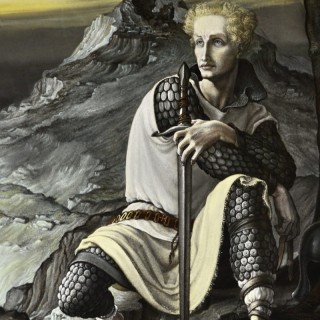 Sir Titurel Hears the Angel’s Voice on the Mount

Inscribed: Hail to Thee Chosen Hero of the Most High/The Lord hath called thee to Guard the Sangreal on his Mount Montsalvatch
Signed and inscribed with title and the artist’s address on a label on the backboard
Gouache
Framed

Frederick Arthur Staples was born in Kilburn in 1888. At some time he moved to Essex, living at Hope Cottage, Buckhurst Hill. He died in Essex in 1969. The style of this work suggests that it may have been intended as an illustration.

The legend of Titurel comes from the early thirteenth century Middle High German romance by Wolfram von Eschenbach and seems to have been a prequel to his earlier work, Parzival. The young Titurel was visited by an angel who announced: “Hail, chosen hero of the Most High! The Lord hath called thee to guard the Holy Grail on His Mountain, Montsalvatch. Set they house in order, and obey the voice of God.” Titural returned home were he divided is wealth between his servants before being led on a treacherous journey to the Holy Grail where he built a temple for its protection. His descendant was Sir Percival.