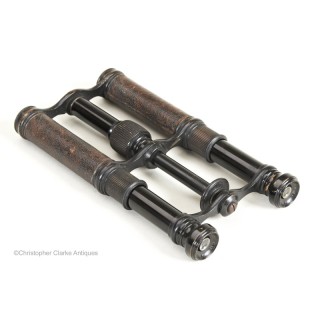 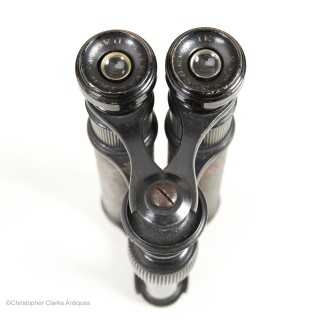 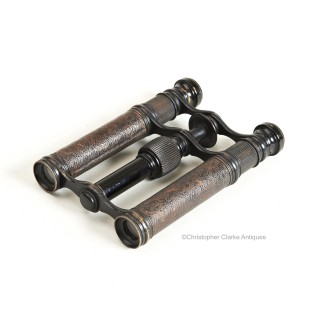 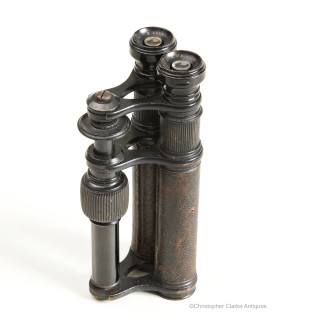 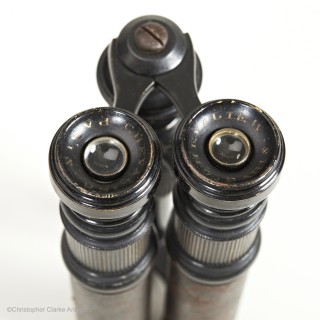 This type of binocular are often called Long Johns and are associated with naval use, perhaps because they are essentially a twin pair of telescopes. This pair, however, are very unusual for being particularly small in size, easily fitting into a pocket. It is likely that they have 6 lenses in each tube and give a very clear image.

Chevalier were renowned opticians in Paris and are often confused with the equally celebrated company Chevallier (with 2 ls ) of the same city. Both businesses were formed in the 18th century and continued throughout the 19th century passing from one generation to the next. Charles Chevalier set up in business alone from his father Vincent, who had founded the company in 1765, before he re-joined the family in 1841 and became the firm’s driving force through the greater part of the 19th century. In time, Charles’ son Louis Marie Arthur (known as Arthur) took over. Charles was involved in the early development of the camera and exhibited at both the 1855 Paris International Exposition and the 1878 Paris Exposition. The quality of the Chevalier’s work was recognised with the award of 13 medals. The main address for the company was 158 Palais-Royal. The business continued through the first World War.

Chevalier were exceptional Parisian opticians and this pair of binoculars stand out for their quality and size. Circa 1900.

Retracted Size is given