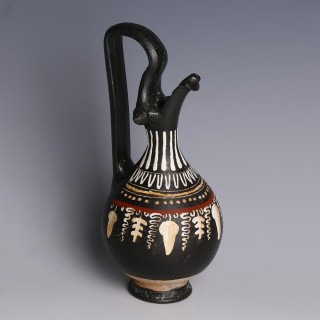 A fine Greek vase originating from the south Italian region of Apulia and produced in the classic Gnathian style. The vessel is modelled in buff light clay with shiny black gloss over the whole surface, and features elaborate geometric and floral decoration rendered in marron and yellow pigment. As is typical of Gnathian ware, the decoration comprises of grape bunches and vine tendrils beneath a crimson band. A moulded lion-head terminal has been places at the point of separation between the handle and the pouring spout, to further enrich the composition.

The epichysis was used in Ancient Greece for pouring substances such as wine or oil. The slender and concaved neck allowed the wine to be distributed with a level of control. This beautiful epichysis displays typical elements of the Gnathian style, which originated from Apulia and consisted of a number of colours painted on top of a glossy, dark background. The main colours used included red, white and yellow, but in some instances the colour palate widened to purple. White became the dominant colour after 330 BC when painting in this style and a ribbed body was also common in later styles. The more commonly seen body of an epichysis usually features a cylindrical box shape, in comparison to the pyriform shape used in this example.

Date: Circa 4th Century BC