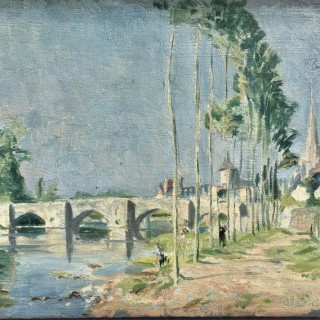 Provenance:
By descent in the artist’s family.

Saint-Savin is located on the left bank of the Gartempe, in the Poitou-Charentes, in the department of Vienne, about 45 kilometers east of Poitiers. The town is focused on the magnificent medieval Abbey Church which has been a UNESCO World Heritage Site since 1983.

John “Jack” Bulloch Souter was born in Aberdeen where he studied at Gray’s School of Art. After winning the Allan Fraser Scholarship he went on to study for four years at Hospitalfield Art College in Arbroath. In 1912, on the recommendation of Sir George Clausen he was awarded the Byrne Travelling Scholarship which enabled him to tour France, Spain, Italy, Switzerland and Belgium. During this trip he was particularly impressed and influenced by the work of Velazquez, Vermeer and Chardin. After serving in the Gordon Highlanders and the Royal Army Medical Corps during World War I he moved to London in 1922 and gained a reputation as a painter of still life subjects and fashionable portraits. His sitters included Ivor Novello and Gladys Cooper. He exhibited at the Royal Academy from 1914 and at the Royal Scottish Academy, Fine Art Society, Redfern Gallery and elsewhere. During World War II he worked some of the time in the Post Office Censorship Department as a translator but spent the majority of his time restoring paintings at Windsor Castle. He returned to live in Aberdeen in 1952. Works by him are in the collection of the Victoria & Albert Museum, Aberdeen Art Gallery and elsewhere.