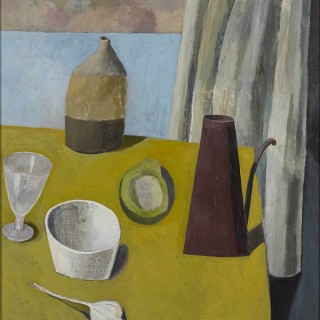 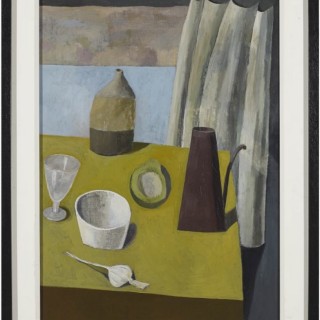 Still Life with a Curtain

Framed oil on canvas by Simon Quadrat PPRWA NEAC Simon is represented in London by Panter & Hall Size quoted is painting size only, please contact the gallery for overall framed size. We regularly carry new work by Simon in stock and hold solo exhibitions in the gallery every few years. Please do contact us to be added to our mailing list for future events. Simon Quadrat was born in London in 1946, the son of Jewish émigrés who separately fled Germany in the 1930s. During his school years he painted factories and desolate urban landscapes. Reading and visiting art galleries became part of his lifestyle; however, he has stated that at that time he “had no thought of becoming an artist.” Instead he read law at university and went on to establish himself as a criminal barrister in the Temple in London and then from 1985, in Bristol. When not at work, he spent many hours painting and playing the piano. Yet, after thirty years, Simon “succumbed to a strong urge to paint professionally and so gave up the Bar to become a full time artist.” In 2000, Simon took to becoming a full-time artist painting his Still Lifes, urban landscapes, and imaginary narrative compositions. “As for my work, the paintings must speak for themselves. The viewer will see themes, preoccupations and influences.” Artists from the 14th century to the present are acknowledged influences upon his work, in particular some of the Modern British and European painters from the immediate pre and post war period. Documentary films, as in the GPO Film Unit and Recording Britain, and archive photographs recording images and events of the 1950s, the period of his childhood in London, all supplement his memory, feed the imagination and metamorphose into his painting. Since 2000 his work has been exhibited in one-man shows in London, Bristol, Bath, and Cambridge, and also in numerous group exhibitions, major London Art Fairs and at the RWA. In 2004, he was elected an Academician of the Royal West of England Academy and in early 2007 was invited to become its Academicians’ Chairman.’ In this capacity he chaired the Exhibitions Committee, responsible for the major exhibitions in the main galleries at the RWA. He was elected President of the Royal West of England Academy in 2010. oil on canvas.

Still Life with a Curtain