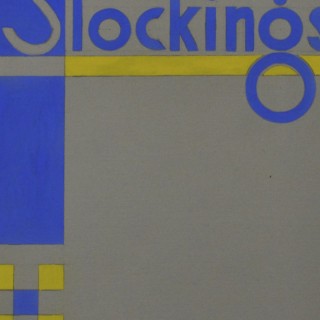 Marie Palmer-Smith (1899-1997)
Stockings
Bodycolour over traces of pencil, unframed, in conservation mount only
24.5 by 17 cm.
Marie Palmer Smith was born in King’s Norton, Worcestershire. Known as Bay to her friends and family, the Christian name Palmer was after a favourite uncle and from an early age she used the name in her signature and later hyphenated it to her surname. The family moved to Worcester where she attended the Alice Ottley School and later the School of Art and Design at the Victoria Institute. By the late 1920s and early 1930s she was working as a commercial graphic artist, primarily commissioned by local businesses to provide advertising and marketing material including catalogue covers, packaging, posters, window displays and Christmas cards. He clients included Milwards Knitting and Sewing Needles; the confectioners, Clarke, Nickolls & Coombs; Abell & Smith, Electricals and Manders Paints. In 1941 her home in Worcester was damaged by an air raid and she moved to Malvern where she ran a sweet shop. She married John Bennett and together they devoted themselves to the study, photography and conservation of nature. For many years she was President of the Worcestershire Naturalists’ Club.