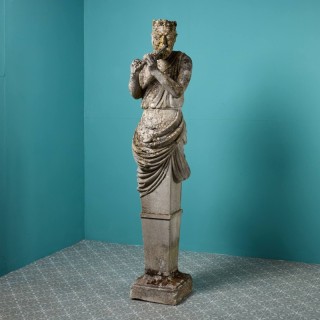 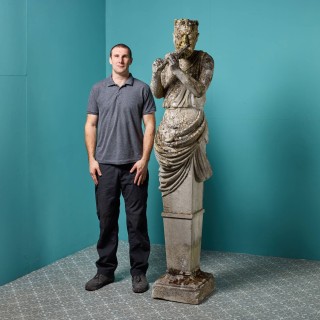 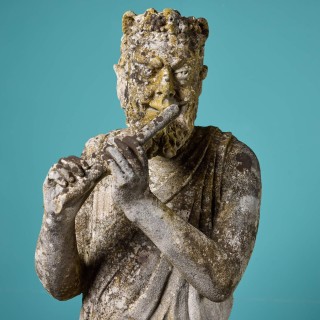 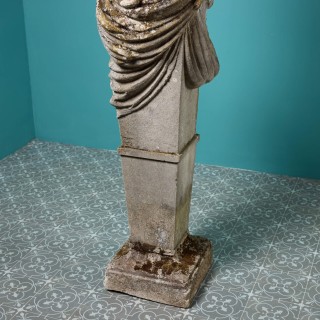 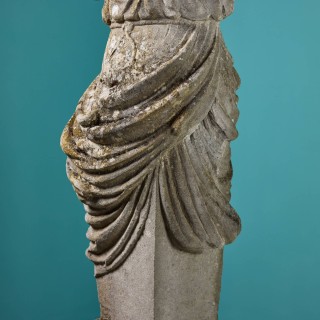 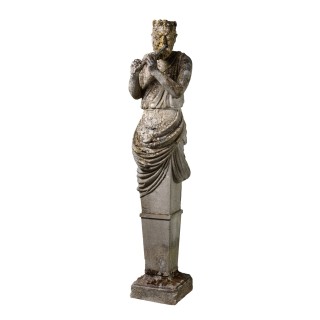 Pan, one of the oldest Greek Gods, is depicted here in Portland limestone in tall term-style. Associated with nature, woodlands and pasturelands, this Pan garden statue has a mythical appearance, his sharp and mischievous carved features beautifully preserved as he plays his flute, with which he is often depicted. At more than 150 years old, this statue is in excellent condition and has weathered beautifully over the ages, complementing Pan’s role as a force of nature. He is hand carved with wild and energetic looks, with striking eyebrows, a prominent nose and pointed ears similar to those associated with an elf or wood nymph. This Pan statue makes a beautiful feature in a country garden, especially if seeking a classical, nature-worn look.

Ordinarily, the Greek God Pan is depicted as a mythical being with the body of a man and the legs of a goat. However, this statue is in term-style, depicting the face, arms and torso of Pan swathed in fabric above a tapering square pedestal base. It was made in the mid 19th century, during a time when interest in Pan was revived. Many communities organised festivals inspired by the Greek god associated with the forest, hunting activities and wildlife. This statue’s tall scale makes it a beautiful feature for a garden, sitting amongst bushes and wildflowers, nature having weathered the stone with an aged look that only time can create.