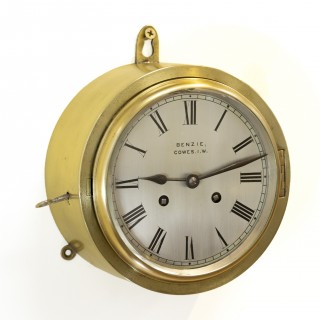 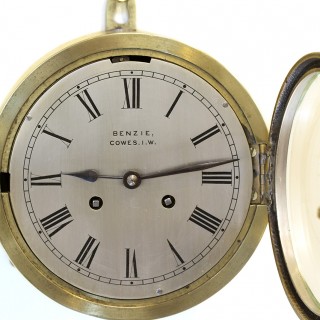 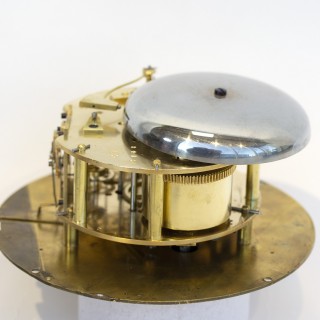 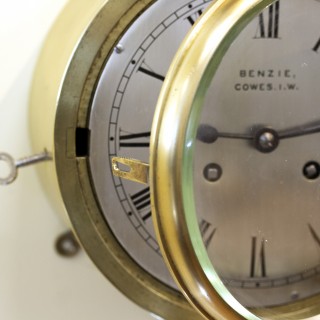 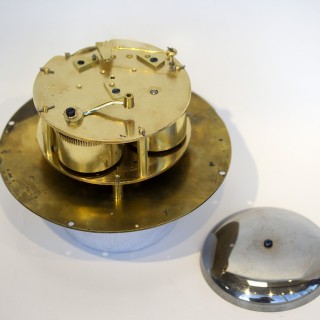 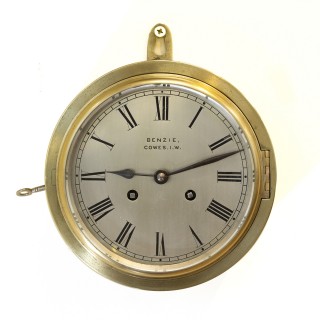 A very nice example of an antique ships clock, striking on a large bell, by Benzie of Cowes, a clockmaking firm that has proudly held no fewer than eight Royal Warrants. Indeed, a Benzie clock hung on a bulkhead on the Royal Yacht, Britannia.

The quality two-train 8-day movement is accompanied with the original brass key. It has an oversized shallow bell mounted on the backplate, which gives a clear sonorous strike on the hour and the passing of the half hour.

The silvered dial is 5½ inch in diameter, with well-engraved and wax filled Roman numerals, and signed BENZIE, COWES.

The bulkhead style solid brass case is polished and lacquered. The bezel has a locking latch, and is fitted with the original heavy beveled glass.

The firm of Benzie still exist in Cowes today. Information from their website tells us that it was established in 1862 by the late Mr. Simpson Benzie. Through his artistic application of nautical subjects to jewellery, the founder of the business gained a world-wide reputation. He was the first to design a clock to strike the ship’s bells. Since he died in 1915, his son took an active interest in the concern since 1891, to follow on similar working lines. The Royal Warrants held by the establishment are: H. M. King George V., in 1910; H. M. the Queen, 1912; H. M. King Edward, 1901; H. M. Queen Alexandra, 1901; H. M. Queen Victoria, 1885; H. R. H. the Prince of Wales, 1884; H. M. King of Greece, 1886.”