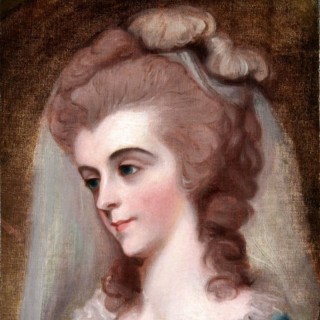 Daniel Gardner was born in Kendal. He went to the local grammar school where he was a fellow pupil with George Romney.
About 1767/8 he left for London and is said to have worked with Romney. On the 17 March 1770 he entered the Royal Academy Schools where he received tuition from Zoffany, Dance and Bartolozzi and was the Silver Medallist in 1771.
Gardner exhibited one painting at the R.A before briefly assisting in Reynolds studio circa 1773.
He went on to establish a fashionable practice, specializing in small scale portraits in crayons or gouache, often borrowing Reynolds poses.
His oils date from c.1779 and are rare.
He married Nancy Howard c.1776/7 and they had a son, George who was born in 1778. His wife and a second son died shortly after the birth and Daniel never fully recovered from the shock, sending his son George to be looked after by a friend in Kendal.
Gardner died in London on 8 July 1805 aged 55 from a liver complaint.
Redgrave writes, ‘He had a nice perception of beauty and character and composed with elegance’.