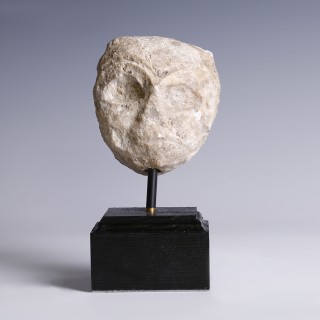 A finely carved Sumerian stone mask of a female’s face, probably depicting the Mesopotamian mother goddess Nammum, approximately dating to the Late Uruk or the Early Dynastic period. Her facial features have been sensitively carved in an idealised manner, including an arching brow, almond-shaped eyes, a prominent nose and thin lips. Her eyes are hollowed, two inlays with painted irises might have been placed inside. The head features a flattened forehead, with two drilled holes at each side, in which there was probably once an inserted material functioning as her hair, or mantle. A deep, hollowed recess is at the back of the object, indicating it might have been attached to a flat surface and intended as a votive offering.

The measurement in height includes the head only.

Very fine condition, with minor chipping to encrusted surface. The piece has been mounted on a custom made stand, ideal for display