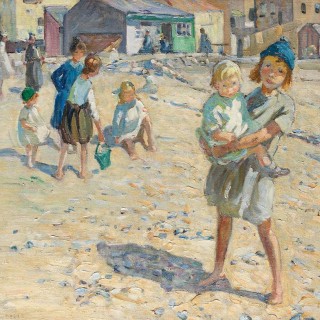 Dorothea Sharp was a Landscape and figure painter who worked in oils.

Dorothea Sharp studied art at the Regent Street Polytechnic and continued her training in Paris several years later. Like Elizabeth Forbes and Christabel Cockerell, she was at the forefront of the British Impressionist School, and is particularly well known for her informal subjects of children, often playing in the garden or on the beach.

Dorothea Sharp’s work was exhibited at the Royal Academy between 1901-04, in the provinces and also abroad. She was elected to the Royal Society of British Artists in 1907 and the Royal Institute of Oil Painters in 1922.

Dorothea Sharp lived in London, also at Blewbury in Berkshire and St.Ives in Cornwall.

If you require any further information on Dorothea Sharp (1874-1955), please feel free to contact us.