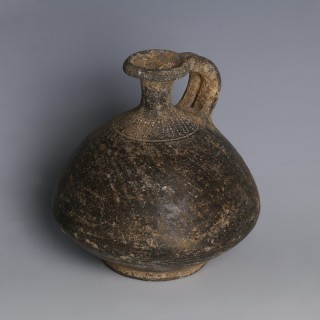 An unusual example of Tell el-Yahudiyeh brown erthenware juglet, featuring a globular body, sitting on a flattened base, a short cylindrical neck and an everted, flaring rim. A single applied handle extends from the rim to the shoulder. The vessel features an incised geometric decoration comprising a band of punctured dots, extending from the neck to the shoulder.

Tell el-Yahudiyeh Ware refers to a distinctive terracotta production of the late Middle Bronze Age-Second Intermediate Period, recovered for the first time in the Tell el-Yahudiyeh site, located in the eastern Nile Delta in Egypt. However, pottery of this type have been recovered also in Cyprus and in the Levantine region. One of the main characteristics of this pottery style is the punctured geometric decoration, which was then filled with chalk, creating a dramatic contrast with the usually grey or light brown ware.