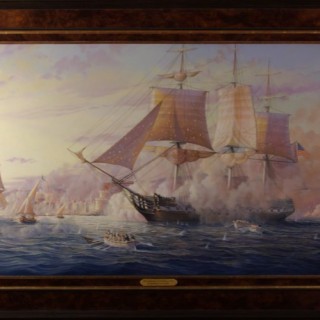 The Bombardment of Tripoli by the USS Constitution and an American fleet, 1803.

Bill Bishop paints almost entirely in oils producing finely detailed works which are carefully researched for historical accuracy. He has painted everything from Viking ships to windsurfers, and historical naval battles to contemporary yachting scenes. In recent years, whilst still considering himself primarily a marine artist Bill, with a love of wildlife, has also taken to painting animals of all kinds.
Bill has been selling his work for many years with Quester Gallery in America, the maritime art dealers, as well as accepting commissions from around the world. Commissions invited today for Marine, Vintage Cars and Aircraft.
Works represented: Royal Naval Museum, Portsmouth; a depiction of ‘Windy Corner’ at the Battle of Jutland. The Mary Rose Trust; the Mary Rose, King Henry VIII’s warship, both in her recovery cradle from life in watercolour and also the definitive version of how she originally looked in oils. Warrior Museum; HMS Warrior. The City of Bristol; John Cabot’s ship, Matthew of 1497. The Minnesota Marine Art Museum, America- A monumental battle scene to mark the bi-centenary of the Battle of Trafalgar, 2005.
Dictionary: Sea Painters of Europe and America 3rd Edition, by E.H.H Archibald.
Private collections: America, Canada, Australia, New Zealand, Singapore, South Africa, Oman, Gibraltar, Germany, The Falkland Islands, Belgium and Denmark, and the UK.
USS Constitution: The 44-gun United States Frigate Constitution was built in Boston and launched in 1797.Named by President George Washington

The Bombardment of Tripoli by the USS Constitution and an American fleet, 1803.