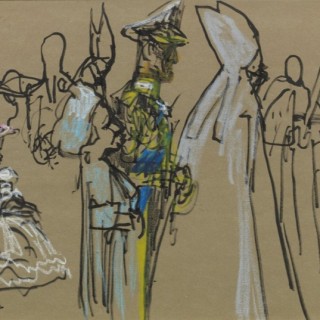 The Duke of Edinburgh and HM the Queen with Bridesmaids
Mixed media on paper
12 x 17 ins
Feliks Topolski was the great chronicler of British pageantry in the last century. Originally sent to London in 1935 to record the state funeral of King George V he immediately fell for the ‘exoticism’ of the city and the pomp and ceremony of state occasions that the British have developed into a fine art. In 1958, by then a naturalised citizen, he was commissioned by HRH The Duke of Edinburgh to produce a large-scale mural commemorating HM The Queen’s coronation day, in a long corridor at Buckingham Palace. Topolski’s style of narrative painting was well-suited to the subject matter and the mural was based on his own personal impression of the Coronation, which he had watched in the streets outside the Abbey having attended the final rehearsal. The Duke seemed pleased with the results, writing

Topolski had been commissioned by Vogue to produce work for its 1947 Royal Wedding issue and during the 1977 Silver Jubilee celebrations Selfridges in Oxford Street invited him to decorate their windows to commemorate the event.