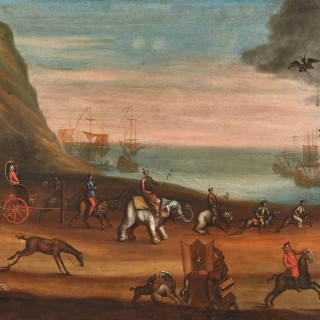 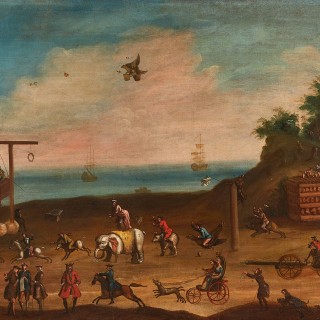 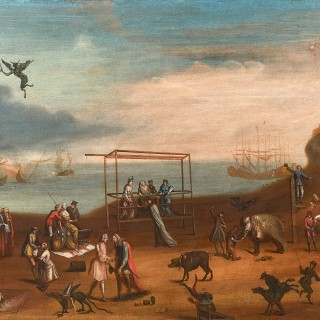 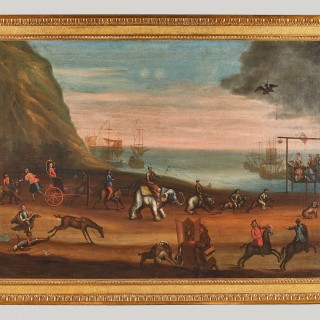 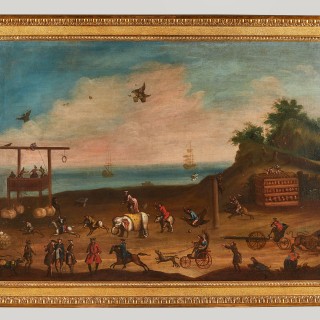 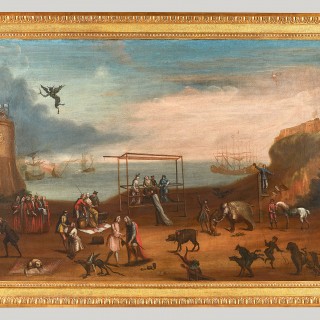 The European Race: A Set of Important Political Paintings

This set of three previously unpublished large oil paintings, known collectively as The European Race, chart the struggles between the European powers in the 1730s from an English point-of-view. They present the struggle in the form of a race between the nations for a crown (a symbol of dominion over overseas territory), which hangs from a beam on the umpire’s stand on the right of the first painting.

These fascinating satirical pictures represent large-scale and slightly altered versions of a set of three engravings first published in London between 1737-39 by the engraver Charles Mosley (1720-1770). The overall tenor of the series is deeply critical of Robert Walpole’s cautious foreign policy during the 1730s, when his Whig government held office. They would appear to be early examples of what became in the later eighteenth and early nineteenth centuries the great English tradition of social and political satirical art, as epitomised by Hogarth, Rowlandson and Cruikshank and, as such, are of considerable historical interest.

Tate Britain has an original design for a fan by the French artist Hubert-François Gravelot (Paris, 1699-1773), who worked in London between 1732-45, which is almost identical in composition to the first painting in the present series. Another drawing in the British Museum, also attributed to Gravelot, shows the same scene as the third painting from the present set, but in reverse.

Although it is probable that the present pictures were executed based on the popular prints of the European Race series, the fact that the design for the ‘First Heat’ in Tate Britain matches the composition of the pictures, together with the observation that an early engraving of the ‘First Heat’ in 1737 reverses the composition of the first painting and the later engraving, makes it difficult to make strong assertions on authorship based solely on this formal aspect. It is still possible, therefore, that The European Race pictures could have been executed by an assistant or artist working under the original designer’s (e.g. Gravelot’s) close supervision or authority, or by another artist in London working very close to Gravelot, in the circle of Hogarth.

Hubert-François Gravelot was a French engraver and book illustrator who trained in the studios of Jean II Restout and François Boucher, before moving to London in 1732. In London, Gravelot soon became closely connected with William Hogarth and his circle, amongst whom Gravelot’s Rococo charm and painterliness was a strong influence. Gravelot taught at the St. Martin’s Lane Academy, a school for young artists in Covent Garden. Hogarth and Gravelot also both attended a club of artists and literary men based at Old Slaughter’s Coffee-House on St. Martin’s Lane, which held meetings twice a week and whose membership included the painters Francis Hayman and Jonathan Richardson, the sculptor Louis-François Roubiliac and the musician Frederic Handel.

It is likely that the original designs for The European Race (the second two ‘Heats’ of which are apparently lost) were a result of Gravelot’s active participation in the political debates at Old Slaughter’s and were perhaps a collaboration with other members and artists from Hogarth’s circle, who could have advised him on the peculiarly English point-of-view conveyed in the series. Furthermore, since Gravelot was foremost an engraver and designer, rather than a painter, it seems likely that the present set of pictures of The European Race were executed by another artist working in London during this period.

The present pictures serve as a timely reminder of how Britain’s wars and trade disputes with other European nations in the eighteenth-century and its often suspicious attitude towards its European neighbours (particularly France), continue to echo in contemporary debates about Britain’s relationship with the Continent. They are also a very rare example of early English political satire painted on a grand scale, by an artist who was probably working in Gravelot or Hogarth’s circle in eighteenth-century London.

PROVENANCE:
From the collection of a noble English family

The Political Club, An explanation of the first, second, and third heats of the European race, and of the hieroglyphical frontispiece thereto prefix’d, London, J. Cooper, 1740, pp. 7-40; Frederic George Stephens and Edward Hawkins. Catalogue of Prints and Drawings in the British Museum, 11 vols. (London: Chiswick Press, 1877), vol. 3, pp. 229-314

The European Race: A Set of Important Political Paintings