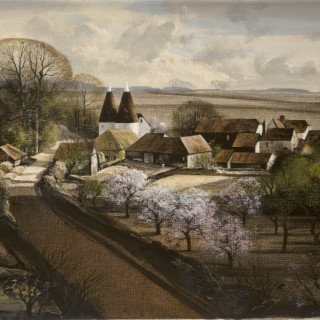 This painting is framed, signed & signed again verso with title

One of ‘our’ best known 20th century landscape painters was born in New Morristown, New Jersey. Bought to England by his parents as a boy, he later studied illustration and printmaking at Goldsmiths College.

During the war he served in the army working on camouflage, and later became a pioneer silkscreen print-maker. He did extensive advertising work for Shell-Mex and BP. He achieved great popular success with his oil paintings and watercolours, depicting the English countryside, in particular Kent, where he lived, with the delineated trees and oast-houses so typical of the area up until the late 1960s.

This large and important example epitomises Hilder’s art at its height.

In a private collection for the last 10 years

In flawless original condition presented in a hand finished frame