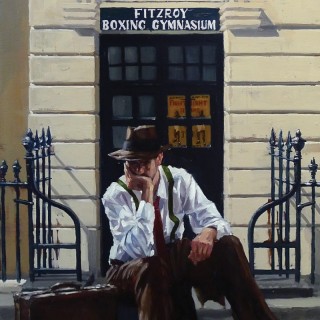 The Grind by Alistair Little

After three years in the film and television industries Alistair turned to two dimensional art to train and work as a freelance commercial illustrator. Early commissions included an underground comic and graphic design work along with storyboard work for the advertising industry. Here he learnt the true value of a strong knowledge of draughtsmanship, and his ability to render credible accurate figure work is the backbone of his work today. In 2001, after four years almost exclusively working in markers and pencils he started experimenting with paint and hasn’t looked back.

Alistair’s artistic influences are immediately evident. His great love of twentieth century cinema, particularly the Film Noir genre, dominates his style and his subject matter. His early experience in the film industry taught him the technique of capturing a wider story in the confines of one still image. Each of Alistair’s paintings burst with cinematic tension, his models are carefully posed and dressed to play a well-choreographed role within a cleverly lit backdrop. His use of chiaroscuro serves to heighten the drama, throwing his protagonists into half shadow or obscuring a face with a carefully tilted trilby. Through these images Alistair constructs an edgy narrative, showing the viewer glimpses of a seamy underworld peopled by morally ambiguous characters worthy of Raymond Chandler.

The Grind by Alistair Little