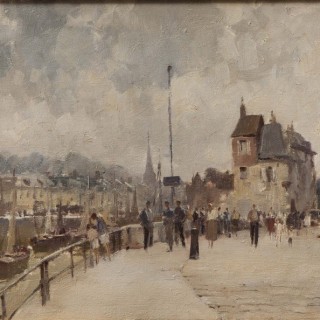 ‘The Harbour at Honfleur’ Painting by Edward Seago

The Harbour at Honfleur’
By Edward Seago

Oil on canvas, signed lower left. Depicts a scene of strolling pedestrians, buildings, and boats along the harbour of the northwest French town, Honfleur.

Honfleur, located in the region of Normandy, is known for its beautiful old port and buildings faced with ageing slate, which this painting depicts. Honfleur became popularised during the Impressionist movement and was depicted by Gustave Courbet, Eugène Boudin, and Claude Monet.

Seago was a prolific artist in both watercolours and oils; from a modest middleclass background in Norwich he was essentially self-taught, although receiving guidance from Sir Alfred Munnings and Bernard Priestman. He developed his skill and technique from studying the British masters such as Constable.

Seago enjoyed generous patronage from numerous members of The Royal Family, who house a large collection of his works in Balmoral. He was one of the official artists appointed to paint the Queen’s Coronation and was invited by The Duke of Edinburgh on an expedition to Antarctica, during which Seago gave pointers to the Duke of Edinburgh.

So highly regarded and sought after, his exhibitions attracted huge queues, dealt with a numbered ticket entrance, with only one purchase permitted to each buyer. Only Queen Elizabeth and the Queen Mother were exempt from this rule!

He authored over 20 books on his life, his art, and advice to young artists. Today, he is one of Britain’s well-known and collected twentieth-century artists.

‘The Harbour at Honfleur’ Painting by Edward Seago