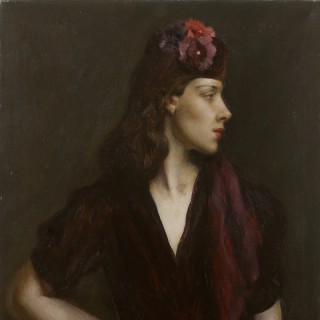 Born and died in Winchester, MA, Pond established himself as one of the most successful and prolific American portrait painters of his day over a long career. Amongst his many illustrious sitters he painted Gloria Morgan Vanderbilt in 1923. After the Great War he was commissioned by the American Red Cross to produce a series of portraits of several American and French Generals and Red Cross ancillary staff. He was the first artist to be permitted to paint in one of the great halls of the Palace of Versailles where he set up his studio. His 1919 Portrait of Admiral W S Benson is in the Smithsonian Collection. Two of Pond’s self-portraits are in the collection of the Museum Fine Arts Boston. He was elected a life Member of the National Academy of Arts, America in 1950, one of the last painters accorded this honour before the practice was discontinued. An award named in his honour is still given at the School of the Museum of Fine Arts, Boston.