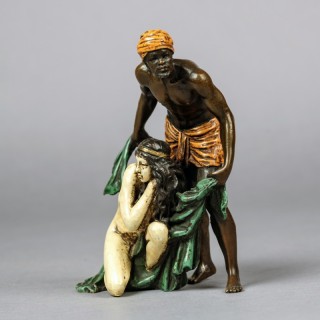 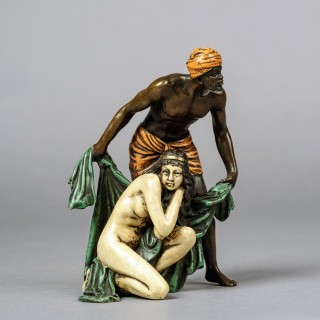 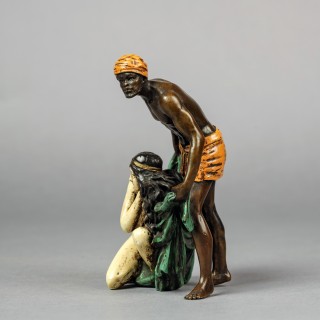 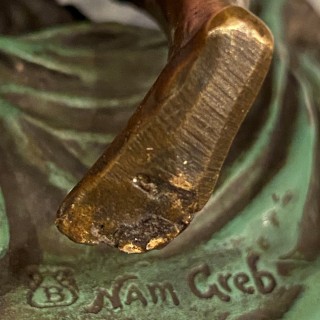 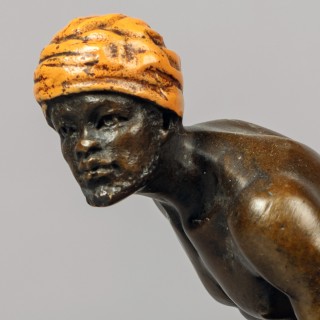 Stamped ‘Nam Greb’ to the base and stamped “B” in the middle of an inverted vase for Bergman.

This exotic bronze is stamped to the base ‘Nam Greb’ a pseudonym Bergman used (Bergman spelt backwards), to conceal his identity and avoid controversy.

Franz Xavier Bergman (1861-1936) was the son of Franz Bergman (1830-1894) a Bohemian metalworker who established a foundry in Vienna in 1860. After his father’s death, Franz Zavier continued the business registering the well-known trademark stamp of the inverted vase with the “B” in the middle.

Although there were many bronze foundries operating in Vienna in this period, it was Bergman’s which has become the most celebrated, especially for his cold painted bronzes. The bronzes were painted with special enamel colours, often applied to the bronze casting whilst still warm, allowing for natural shrinkage on cooling and adding to the permanency of the colour.

Bergman worked with several celebrated sculptors in Vienna at the turn of the 20th Century, such as Bruno Zach, to produce designs for his bronzes.