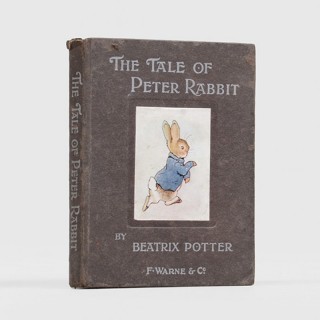 The Tale of Peter Rabbit.

First trade edition, first impression. Warne had reconsidered the “Bunny book”, as they called it, following a second approach from Potter’s friend Hardwicke Rawnsley, an author of children’s verses who had rewritten the text in his own style. Warne were now prepared to publish it (though in a slight to Rawnsley, they preferred Potter’s prose to his verse), on the proviso that Potter provide colour illustrations for the entire story; Potter finally agreed, knowing the book would first appear as she had envisioned, but in turn insisted that the illustrations be printed in the more expensive three-colour process, and the price must be one that “little rabbits could afford”. In 1903, to make room for the introduction of the illustrated endpapers, four plates (including the one of Mrs McGregor and the pie) were withdrawn from the publication. The first trade edition has leaf-pattern endpapers and the text “wept big tears” on p. 51 (the text reads “cried big tears” in the privately printed edition; “wept big tears” in the first three impressions of the trade edition; and “shed big tears” from the fourth impression onwards).

Ownership inscription to front free endpaper. Small tear and a little wear to head of spine, tiny split to head of front joint, but sound, covers and tips a little rubbed, a couple of small marks to p. 44, otherwise internally bright. An excellent copy, in unusually nice condition.

The Tale of Peter Rabbit. 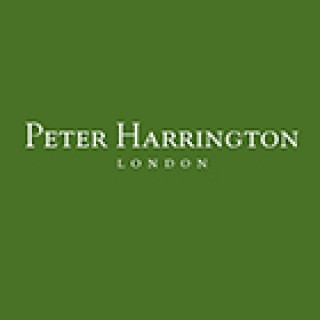